What is OBS Studio? How to download and use OBS Studio to record screen on computer? Check the thorough OBS Studio review to get everything you want.

OBS Studio is the biggest name for screen recording and live streaming in the market. It is an open-source program and available for multiple platforms - Windows, macOS, Linux and BSD. It is super popular among gamers for it helps stream gameplay to Twitch, YouTube and the similar in a professional way. Its real-time screencasting and broadcasting feature also enables users to create live lecture, webinar, presentation and so on.

OBS Studio is seemingly people's first choice to record video and make personal live streaming. But as a beginner, you know a little about the OBS screen recorder. Don't worry, in this article, we will show a thorough OBS Studio review and tell you how to download and use OBS Studio to record screen on PC in details.

OBS Studio packs an array of features and settings to create more possibilities for video capturing and live broadcasting. What are benefits this free screen recorder can bring to you?

OBS Studio allows you to create recording scenes to capture screen, program or browser window, playing videos/games on desktop and screenshot an image. It supports multiple recording modes. You can record part of screen/full screen, capture webcam from external devices, making a picture-in-picture style and more.

OBS Studio boasts real-time broadcasting to multiple platforms, like Twitch, YouTube, Facebook Live and more. You can stream your gameplay, singing, presentation or anything you want to show. Streamlined Settings panel enables you to make the most suitable configuration – like encoder, frame rate, bit rate, aspect ratio etc., - for recording and streaming.

OBS Studio has pre-installed filters for audio recording. You can capture sounds from system and connected microphones with further settings, including noise gate, noise suppression and noise gain. And, you can add transitions during switching scenes or to your own video clips. Some other editing features, like text to video, chroma-keying, masking, color correction, are available as well.

OBS Studio features capturing high-quality video with customized resolution and frame rate settings. It uses hardware encoding to improve video processing for recording and outputting. However, we must notice you that the performance will be greatly suffered if you set a higher resolution/frame rate or run other programs using the GPU on a low-end computer.

Although OBS Studio makes a lot to enhance user experience, from neat interface to Modular ‘Dock’ UI helping you rearrange the layout, it is not so easy to use for beginners. People who unfamiliar with it should have a guidance or trial before using it to record screen in Windows 10 or other systems.

Tip: If you are not a tech-savvy, we highly suggest you to try an easier OBS Studio alternative, for example iTop Screen Recorder. It can record every movement on the screen and capture streaming videos/music, gameplay in a few of clicks. No complex guidelines, 100% safe and clean.

How to Download and Use OBS Studio – Ultimate Guide

OBS official site is undoubtedly that the official site is the safest place to download the program. Once you open the site: obsject.com, you can get download buttons for Windows, macOS and Linux. Click one and the program will be automatically downloaded. Also, you can click Download button on navigation bar to download OBS Studio in other ways (for example via Bittorrent). Besides, some software download sites or stores like CNET/Microsoft Store enable you to download OBS Studio as well.

After it finishes downloading, you can start installing. Take Windows for example. Double click .exe file and follow the instruction wizard to install.

In the following, we will give the guide of how to use OBS Studio to record screen on Windows 10.

Step 1. Launch OBS Studio. An auto scene has been added into Scene panel. And, you can click + button to create your own scene. 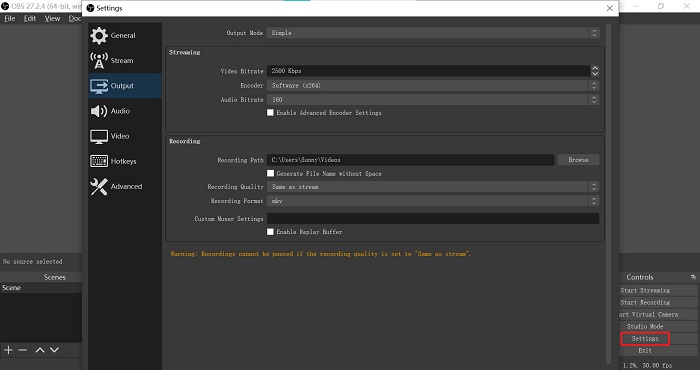 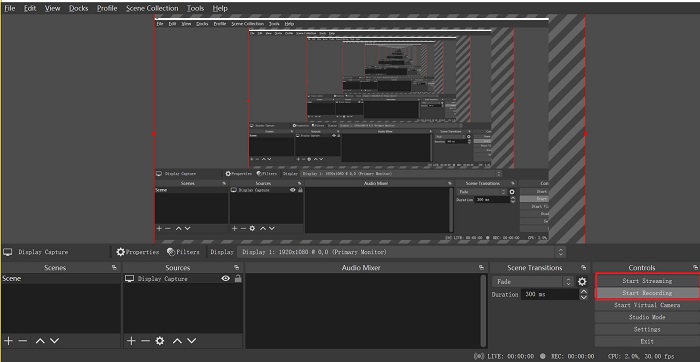 The video rendering speed is affected by customized settings and your computer performance. It may be a bit buffering or lagging to record a 1080P HD or 4K video.

As we mentioned before, beginners should take time to learn how to record screen with OBS Studio and lagging HD screen recording is the trouble if you don’t have a high-end computer. iTop Screen Recorder is picked as the best alternative to OBS screen recorder for PC.

iTop Screen Recorder is Windows-based screen capturing software that focuses on giving the easiest way to record screen. It is available to record Zoom meetings, online lectures, streaming videos, gameplay and more. It supports audio and webcam capturing so that you can record screen with audio and yourself at the same time. Audio Mode enables you to rip sounds only from internet or microphone, and Game Mode specializes in recording gameplay on PC. Thanks to low-CPU usage and hardware acceleration, it can record HD/4K videos without lags.

What's more, it builds in a video editor to enhance your recordings or local videos effortlessly. It can cut, split and merge video/audio tracks. It also empowers you to add text, subtitle, effects and transitions to videos. After editing, you can directly upload the clip online or save it for further editing.

How to Use the Best OBS Alternative to Record Screen?

Step 2. Select recording area, full screen or a specific region/window. You can also choose to turn on Mic or Webcam if you want to record a video with voice and yourself.

Step 4. The recorded video will be automatically listed in My Creations. Click More (…) button to edit or upload it. 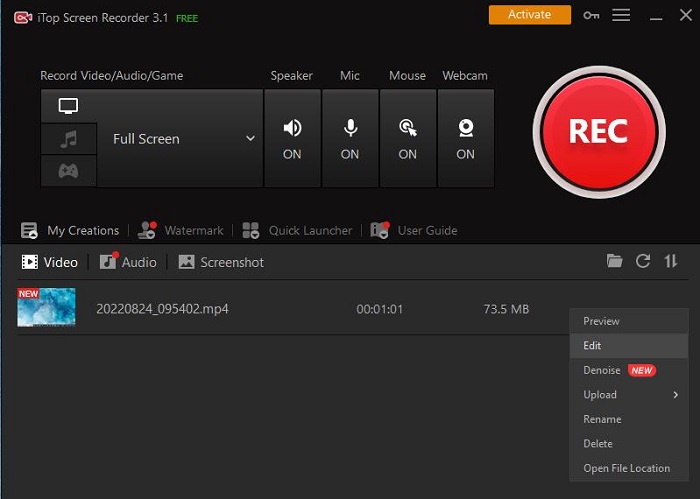 OBS Studio, the open-source screencasting software, wins its popularity for its powerful ability to record video and create live streaming. It is recognized as the best program to record and stream gameplay to Twitch and other platforms. However, it is not so friendly for beginners due to advanced settings. Also, it requires high-end computer to achieve smooth HD screen recording.

iTop Screen Recorder is the best OBS Studio alternative to record screen in a much easier way. It can not only capture HD video with sound and webcam no lagging, but also pre-install the video editing tools to improve your videos. Only in a few of clicks, you can get a screen recording. Try it now!