The screen recording feature first came with iOS 14, released on September 10, 2017. With it, users can easily record whatever is happening on your iOS screen. However, complaints never stop regarding iOS 14 screen recording not working problem. For example: 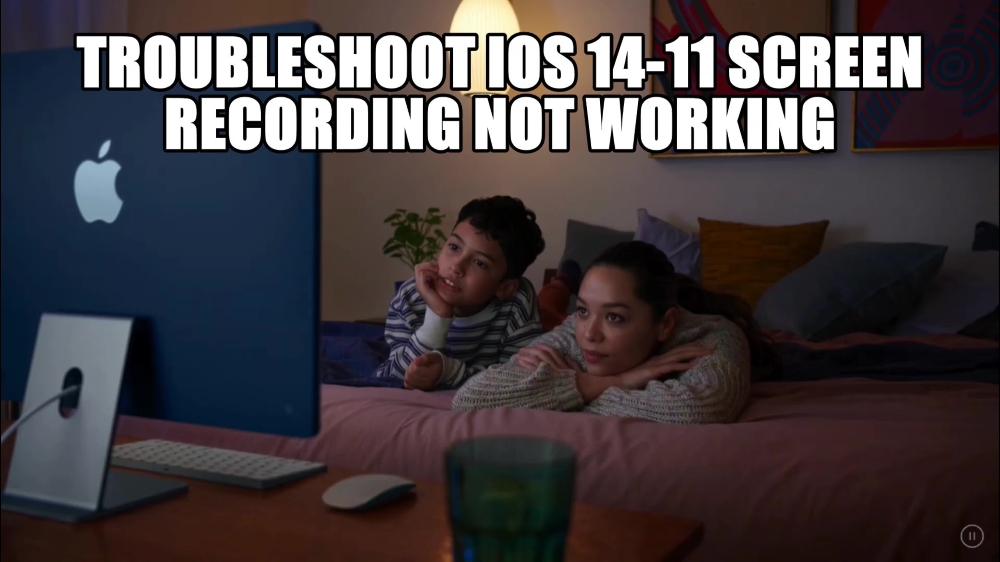 Even though the issues often happen to devices running iOS 14, users still report that they come across them on devices with iOS 12/13/14. In this article, we will troubleshoot the iOS 14/13/12/11 screen recording not working on iPhone/iPad/iPod Touch, and help you get a beautiful and smooth recording.

[Bonus] The Third-party Screen Recorder is Always a Support

If you need a professional and useful screen recorder for iOS or Windows, iTop Screen Recorder is your best bet. It can record high-resolution (even 4K) and high-quality videos on your Windows PC or iOS screen. This free screen recording application never limits your recording time nor leaves a watermark on your video. Another impressive feature is that it offers multiple video formats when exporting like MOV, MP4, WEBM, and AVI. It has multiple recording modes to meet users' needs.

How to record a screen video with iTop Screen Recorder:

Step 1: Download, install and open the software on your device.

Step 3: On the main tool center to select a recording mode by clicking the arrow beside Full Screen and turn on Speaker or Mic if you need audio in your video.

If iOS 14 screen recording not working, RecGo is an ideal option for recording screens for iPhone and iPad. It is an Apple store app and can be easily installed on your iOS device. It offers customized video resolution (360p to 1080p), Bitrate (1Mbps to 12Mbps), and Frame rate (24fps to 60fps).

How to record your screen using RecGo:

Step 1: Download and install RecGo on your iPhone or another iOS device.

Step 2: Launch RecGo and change the settings to recording. 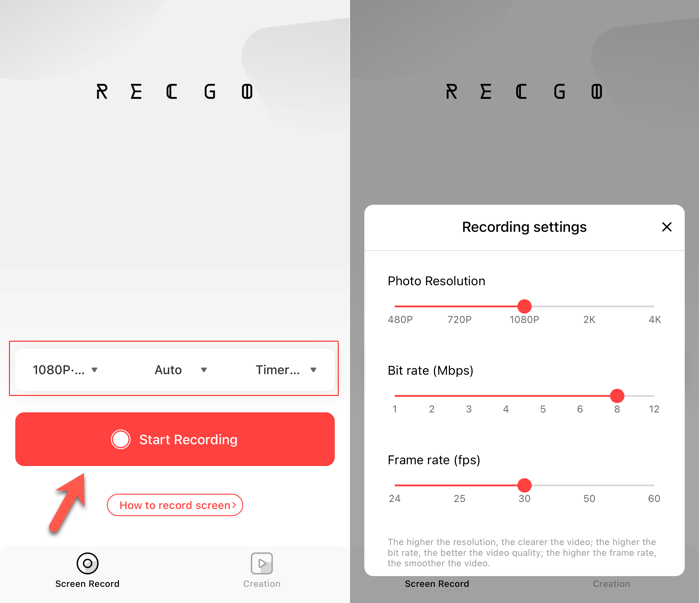 Step 3: Click "Start Recording" and click "Continue" and "Start Broadcast". If you want to record sound, you need to turn on the Microphone.

Step 4: Open the app back again to stop recording and the video will be saved in "My Recordings" in this app.

Check how to record your screen on iPhone/iPad/iPod:

For iOS 13/12/11: Go to Settings > Control Center > Customize Controls and then tap the green button next to Screen Recording.

For iOS 14: Go to Settings > Control Center > More Controls and then tap the green button next to Screen Recording. 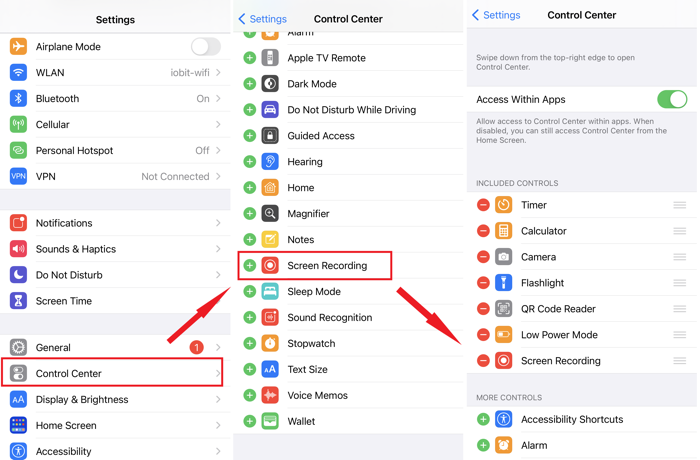 For iOS 14: Wipe down from the upper right corner of your screen.

Step 3: Tap and hold the screen recording icon to select where you want to save the recording and if you want to turn on the microphone. 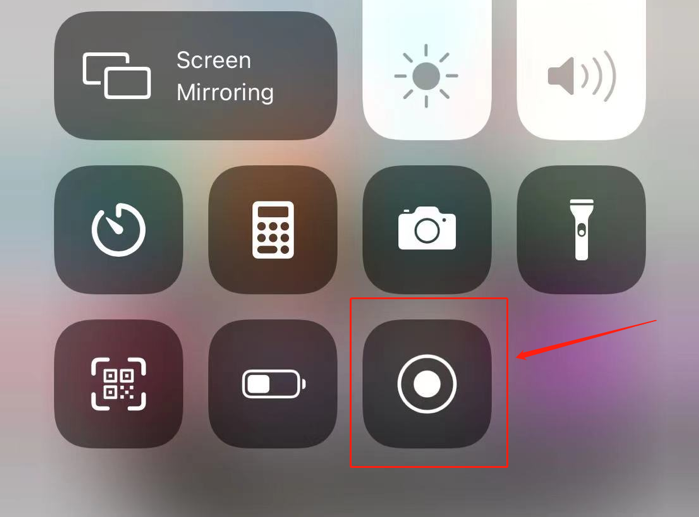 Step 4: Tap "Start Recording" and wait for a three-second countdown. 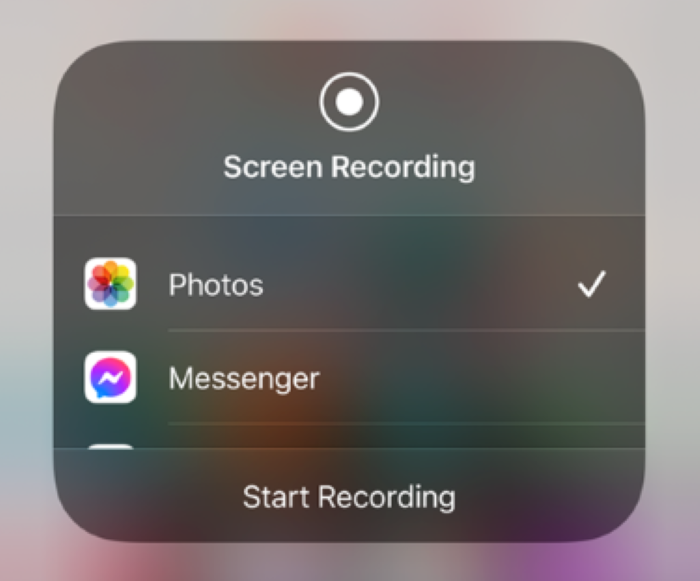 Step 5: Open Control Center again and click the recording icon to stop recording. By default, recordings will be saved to the Photos app.

If you have followed the recording instructions and the iOS 14 screen recording still doesn't work properly, you can check the list below to regain the ability to record your screen on your iPhone/iPad/iPod.

Before you can capture the screen, you need to add the screen recording feature into your Control Center.

2. Screen recording is not recording

Another reason for a silent video could be that the built-in microphone is physically dead. You can test it by making a call to one of your contacts to see if it is working.

Here is the doctor tool to repair your iPhone screen recording no sound:

4. Screen recording failed to save

A recording will be automatically saved and you can access it in the Photos app. If your receive an error message saying "Screen recording failed to save", you can try the methods below.

Low Power Mode automatically disables some settings to reduce the amount of power that your iOS device uses when the power gets low, so it might cause iOS 14 screen recording not to work.

Open Settings > Battery and then slide the button to the left to swift off Low Power Mode. 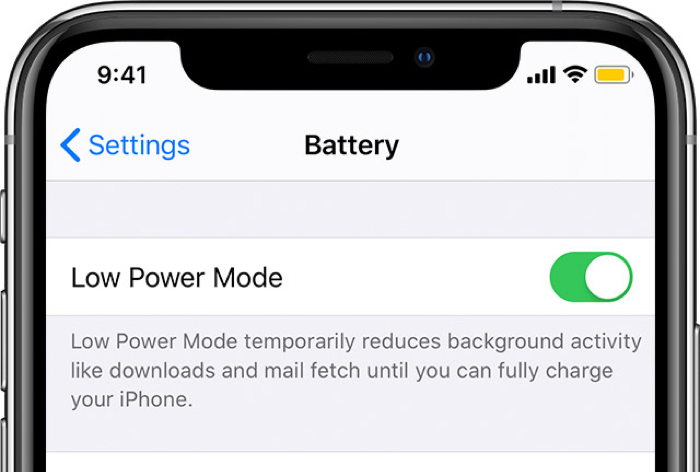 It is not hard to understand that insufficient storage will prevent Screen Recording from saving the video on your iPhone/iPad, especially when your recording is very long.

Check storage and make room for new recordings: Go to Settings > General > iPhone/iPad Storage. You will see a colorful bar indicating your used and free storage. If you are about to use the storage up, go to delete some of your unnecessary downloads or apps. 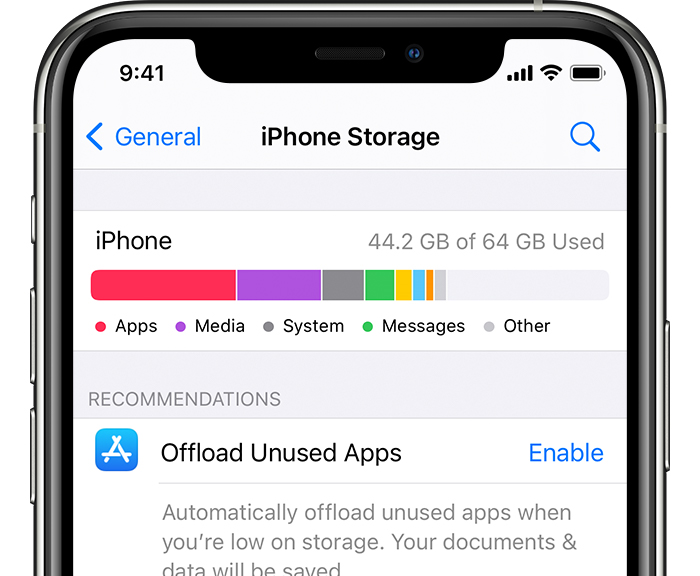 As forementioned, the recording will be saved to Photos by default. If you can't save the recording in there, just try another location.

You need to press and hold the Screen Recording icon until you see a list of apps. Then scroll down to select a location for a recorded screen video.

Some apps may not allow you to record with the iOS built-in screen recording function because those apps contain copyright contents like the Music app. As a result, the error of iPhone screen recording not working occurred. In this case, you will need to install a third-party app to complete a screencasting task.

iOS 14 screen recording not working could result from the buggy version of the operating system on your device. If all the above solutions can't help you fix the problem, you can update your device to the latest iOS. Or, in the worst scenario, factory reset your device.

If you can't fix the iOS 14 screen recording not working problem by yourself, call Apple support to let them do the work for you.