To record apps, games, meetings, PowerPoint or anything on your phone, check the 15 best screen recorder apps for Android & iPhone newly updated by iTop. 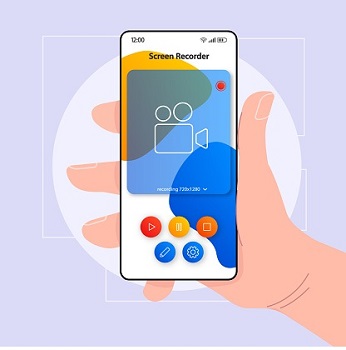 2. One-tap function: one tap to start, pause, resume, and ending the recording

How to record screen for Android?  Android has its built-in screen recorder which has limited functions. And it couldn't live stream to YouTube while recording. To help you record screen you want and make videos after recording to further promote it, the article lists 6 best screen recorder apps on Android to help you record anything that happens on mobile and make videos easily.

ADV Screen Recorder is a very useful screen recorder app free for Android with multiple powerful functions. It is designed to record everything that happens on your screen and record audio at the same time. No root is required. To start recording screen or end it, you just need to tap one button. The video resolution, video bitrate, and video frame rate are adjustable in the settings.

While you’re recording your Android screen, you could record facecam as well by opening the front and the rear cameras which show in a corner of the screen and can be dragged to other corners. What’s more, it ranks as the best screen recorder app for Android because it gives options to draw, write, point, or doodle over the clip with your fingers. You pick a color and customize it.

Record with 2 engines: default and advanced one

Write on the screen randomly while recording

Set your Banner with full customization

XRecorder is a really amazing free screen recorder app convenient to capture screen with facecam and sound on your Android device. Besides, it allows you to take screenshots when recording to capture the moment you want to keep immediately with one tap on the Camera icon. With XRecorder, you’ll capture fantastic and smooth gameplay with clear audio.

After ending a recording, you could edit the video by trimming, setting the speed, adding music and text or other options to present a better video effect. You can do more than if you want to mark somewhere on your screen during the recording process with the Brush tool. With this tool, you could write on the screen by picking a color and text size, draw arrow symbol, circle and rectangle shapes as you like. The disadvantage is that it has ads in the app.

Draw or mark on screen when recording

Edit videos with kinds of options

No watermark and root needed

AZ Screen Recorder ranks among one of the best screen recorder for Android for you can stream your screen to live platforms such as YouTube, Facebook, Twitch, and more in addition to its basic screen and audio recording function and screenshot capturing function. As for video editing, it has more options than XRecorder: converting to GIF, extracting frames, adding subtitles and stickers, etc. You can set up time-lapse or video speed, and customize text and logo before recording with respect to your demand.

Stream your screen to live platforms

Draw on the screen while recording gameplay or others

Transfer recorded videos and screenshots to your computer through Wifi

Also Read: How to Record Your Screen on Windows 10 with Sound [Free]>>

Super Screen Recorder is the best professional app available on Android to record screen, livestream a video, and capture screenshots. No root required and no watermark, it records smooth high-quality videos with clear sound. Similar to AZ Screen Recorder, you can livestream your screen to other platforms that support live RTMP streaming. Though it needs to pay for using it after 3-day free trial, it is popular for its amazing features below.

Touch screen to draw with the brush tool

Like a video editor with close to 20 editing functions

As its name suggests, Game Screen Recorder is especially a premium screen recorder app for recording games without root and easily share to your friends with one tap. It doesn’t require root as well. Different from other screen recorder apps, it has a prologue editor, with which you can edit the prologue from text color to background image and add it to your video.

Edit prologue and add it to your video

It is considered to be the best screen recorder app to record almost all scenes: video calls, online shows, live gameplay, sport event, movies, and more. You can record video with facecam and record clear sound. Video compression and conversion to MP3 are available within the app. After paying for the VIP version, you could have more fun recording and create videos.

Write or draw with a magic brush while recording

Restore the video you recorded before

You may need: How to Record Your Screen with Sound on Mac/PC/Mobile>>

What if you use a mobile phone with an iOS operation system? We find some screen recorder apps over 4-star ratings on App Store and test them one by one. Then we select the following 5 well-designed and full-featured screen recorder apps, free and paid.

Do you need to record games and apps for tutorials, game walkthroughs, video demos, or others on your iPhone? Try the best screen recorder app for iPhone. With it, you can record your screen with facecam reactions. To personalize your reaction, you can set the reaction shape, position, and size. Change canvas and background color, adjust playback speed, and other settings can be done when editing a recorded video.

Go Record is an all-in-one free screen recorder for iPhone with facecam and editing capabilities. It allows you to use your microphone to add audio commentary to fine tune your screen recordings along with other fully-fledged editing suites. You can easily record games, apps, movies, and others and export your video to the photo library or share it on YouTube.

RecPro claims to be the best screen recorder free to record screen on iOS devices with facecam. You can enjoy unlimited screen recording time. In addition to record high-quality videos with video resolution, frame rate, and birate settings, you can edit recorded videos to improve them, including adding stickers and resetting the playback speed. Changing the position and size of your facecam reaction can be realized. Then you can stream to multiple platforms to appreciate your work.

You may be interested in: How to Use Streaming Audio Recorder to Download HD Audios Whenever & Wherever [Free/Safe]>>

The Screen record is one of the best game screen recorder apps for iPhone to record gameplay with facecam that can be moved to any corner. Starting to record your screen just needs one tap on the screen, so the same with pausing the recording or end it. It has other awesome features: editing videos with inbuilt video editing tools like filters, trimming, adding background music. The price for the app is $3.99 per week or $39.99 per year.

Want to live streaming while recording screen on iOS? Then Screen Recorder Z, designed to be simple and effective to use, can meet your demand. It helps you to record anything on your screen with only one tap. During the process of recording, you can add facecam reaction. Meantime, you can livestream to YouTube, FB, and Twitch. After that, you can add audio comments to your video and utilize video editing functions to trim or crop your video. As the video recording ends and is edited, you can choose to share it with social networks.

ACE Recorder is one of the best screen recorder apps for iPhone, with which you can record screen videos and livestream your screen to platforms like YouTube and Twitch with 1080p quality. Before recording, you can set to record facecam, application audio and microphone audio and add watermark or not. It has various editing features: change speed, background, volume, add GIFs, custom canvas, and share with friends anytime...

As a screen recorder that receives 4.5-star rating, Screen Recorder + does give you a hand to record screen for apps and games you like for making tutorials, demos, video calls, or anything. It records game sound clearly without background noise. After recording your screen, you can add facecam at any position to make some video reactions. And use your microphone to add audio commentary to enhance your recording. To make a popular and interesting video, you can trim the video, add music and sound effects, change voice, add gesture stickers, and more. As long as you use it, you’ll love it.

Also read: How to Record Gameplay on PC in 2021 [4 Definitive Solutions]>>

It becomes one of the most popular screen recorder apps for its multiple options to record screen on Android and iOS. With a simple interface, it is easy to use to record screen as well as take captures. Your reactions can be recorded with facecam while recording a game screen and voice. You can put in your favorite BGM and an Intro or Outro video to make a personalized video that is creative and amazing. Watermark can be removed with additional in-app purchases.

Add BGM and other elements to your video

Make your own watermark

The free screen recorder app has a big market for it works on Android, iOS, Windows, Mac, and Chromebook. It is reliable and trustable because it has its official website. You can use Screencast-O-Matic to create screencast videos and edit videos with the robust video editor. Add animation effects, use automated captioning, add overlays, and more. You could upgrade to Premier plan to explore its built-in stock library to inspire and make wonderful videos.

Connect to its desktop video editor and transfer your recordings easily.

Edit recorded videos with about 10 tools

Add narration in a video

Except for recording screen on smartphones, there are 10 best screen recorders for PC and Mac that also support you to record Zoom Meeting without permission, and record live streaming, Facebook live video, game, etc.

The 15 best screen recorder apps are available either on Android or on iOS, or both, and their ratings on Google Play or App Store are above 4.2 stars. They are almost free to use. In particular, iTop Screen Recorder, the best free screen recording software for pc,  enables you to capture screen on any smartphone for meetings,  gameplays, tutorials, or other purposes, choose one of these screen recorder apps with distinctive and powerful features and functions. Then edit these recorded videos and upload them to social media for sharing with people.