5 Best Ways to Record Roblox Gameplay on Any Device 2022

How to record Roblox free? If you need help, here lists 5 best ways to screen record Roblox gameplay videos with voice on various devices, no lag and no time limit.

Roblox, a leading online game platform, has attracted millions of active millions of game players and developers nowadays. It is popular and reputable due to not only providing diverse game types, varying from RPG to FPS, fighting games and so on, but also encouraging creative developers to launch their own works. If you are a Roblox fan, you have probably experienced lots of games and even tried to record Roblox for sharing your skilled gameplay with friends or on SNS. 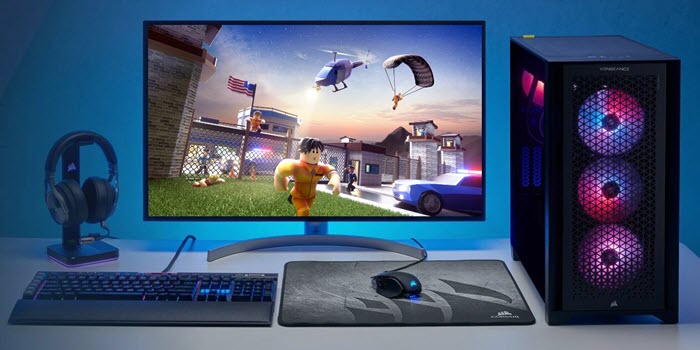 How to record Roblox gameplay for free? If you are seeking for a method to screen record on Roblox with ease, the following ways can give you a big hand. No matter which device you are using to play Roblox, you can get a great gameplay recording solution.

Way 1. How to Record Roblox Gameplay with Built-in Recorder

Roblox features a built-in recorder enabling players to capture gameplay video on Roblox conveniently. It is pretty easy to use, in just 2 clicks, Start and Stop. The recorded gameplay footage will be automatically saved to hard drive.

However, the inbuilt screen recorder for Roblox has limited features. It doesn't allow you to set screen region for recording and outputs low video quality. What's more, you can't use it to record video with voice. If you just want an easy tool to keep highlight clips or make screenshot, it is better enough. Then, let's learn how to use it to record Roblox gameplay step by step.

Step 3. Click Record Video button and it will start recording your screen. Please note that it can only record full screen. 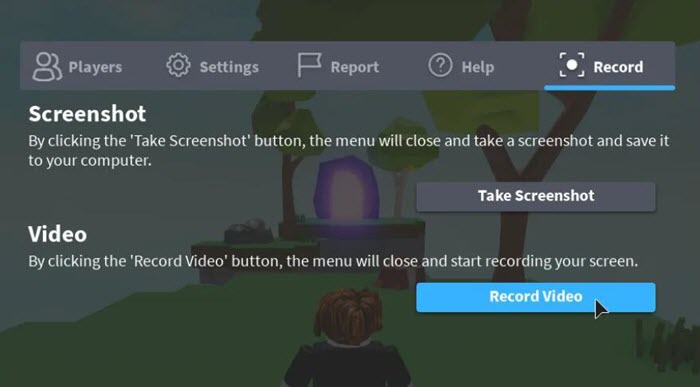 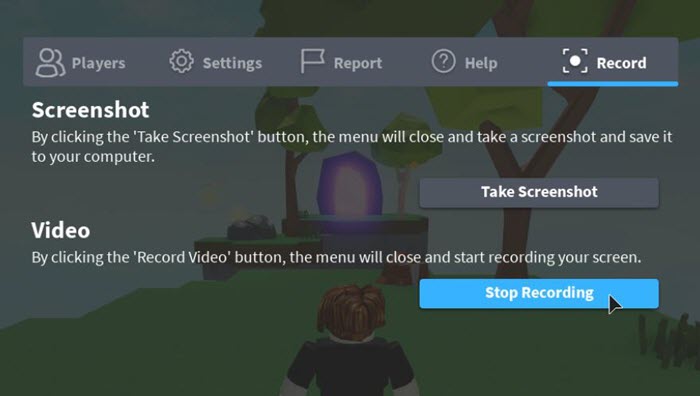 Step 5. The gameplay video will be automatically saved to your hard drive. Go to "My Videos" folder to view it.

Way 2. How to Record Roblox Gameplay with Voice on PC

The built-in recorder is recognized as the easiest way to screen record Roblox gameplay. However, the restricted functions can't really satisfy players who want to share a great gameplay footage on YouTube, Twitch etc. So, if you need a better solution to record Roblox with voice or facecam on PC, iTop Screen Recorder is the recommendation.

How to Record Roblox with iTop Screen Recorder

Step 1. Download and install the program on your PC.

Launch the program and start your favorite Roblox game.

If you play Roblox game on site, your can directly use default recording mode. Select the record region, full screen, fixed ratio or window. Then, turn on Mic/Webcam to record Roblox with voice/face.

If you play Roblox game on Windows or Xbox, please use Game Mode. The settings are similar to the default mode. 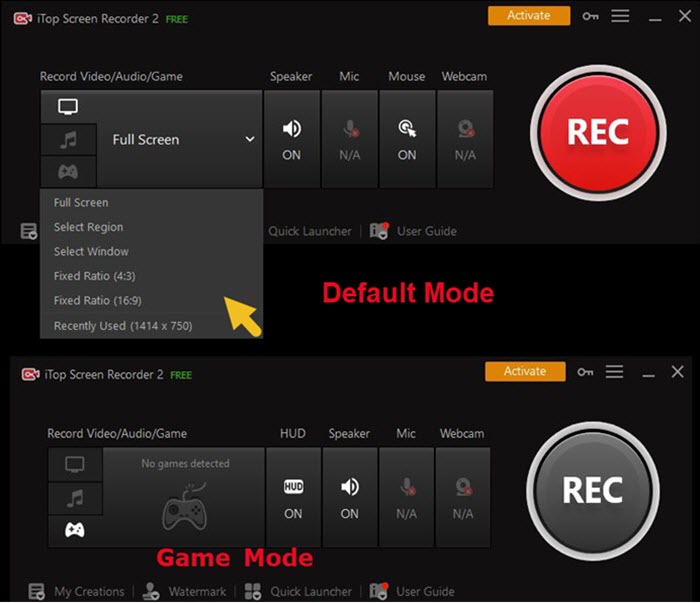 The recorded Roblox gameplay video will be listed in My Creations. You can trim to remove unwanted segment of the video and export for later sharing.

Way 3. How to Screen Record Roblox on Mac

QuickTime player is the most ideal tool to record Roblox on Mac. It is an inbuilt video player for macOS Mojave or below. Besides decoding various formats for smooth playback, it also features capturing screen in mainstream formats for later sharing. Now, let's learn how to screen record for Roblox on Mac with QuickTime Player. 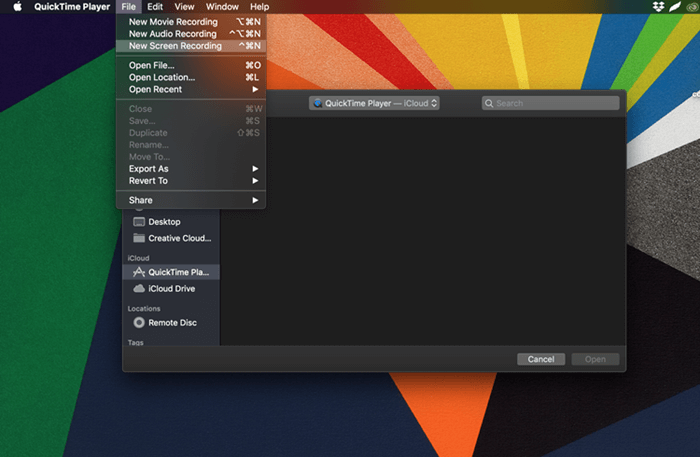 Step 3. Select the region your want to screen record on Roblox. Turn on microphone in Options if necessary and then click Record button to start.

Step 4. Press Command+Control+Esc keyboard shortcuts to stop recording. And, the recorded gameplay video will be automatically saved on desktop.

Way 4. How to Record Roblox Gameplay on Chromebook

Chromebook is a considered as the best laptop for students because it is cheaper, slighter and safer. However, Chromebook users can hardly find a program to record screen. If you're trying to record Roblox on Chromebook, online screen recorder is the best choice. And, iTop online screen recorder can perfectly meet your requirements. It is simple to use and fully supports Chrome, Firebox and Opera. Also, it enables you to record screen without watermark.

The following guide can lead you to record Roblox gameplay on Chromebook easily and quickly.

Step 1. Open Roblox game on Chrome or other browsers on your Chromebook. 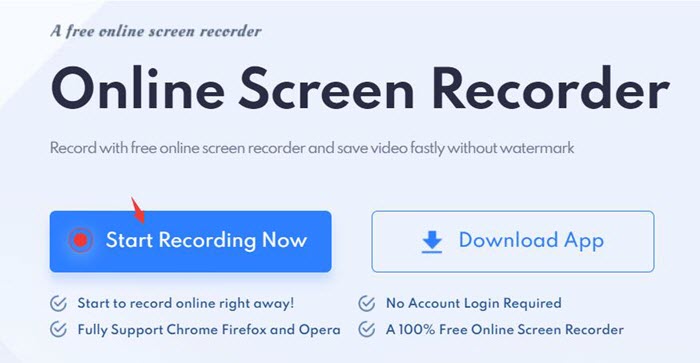 Step 3. If you want to record Roblox with voice, please select a sound source, Microphone Audio or Browser audio. Otherwise, select No Audio. Then, click Next. 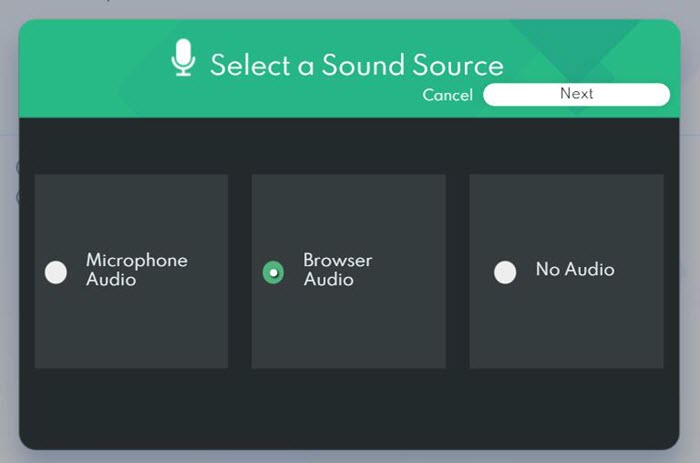 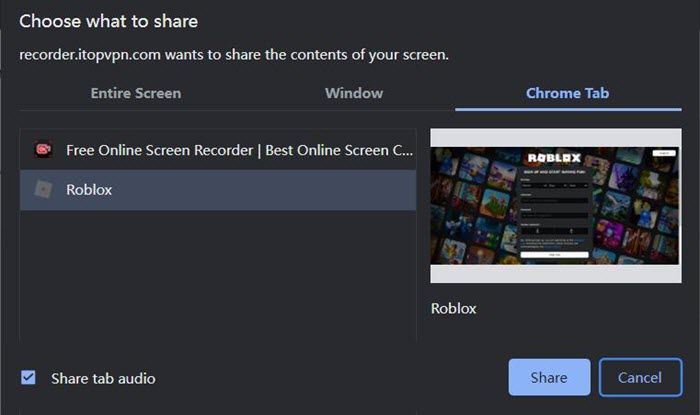 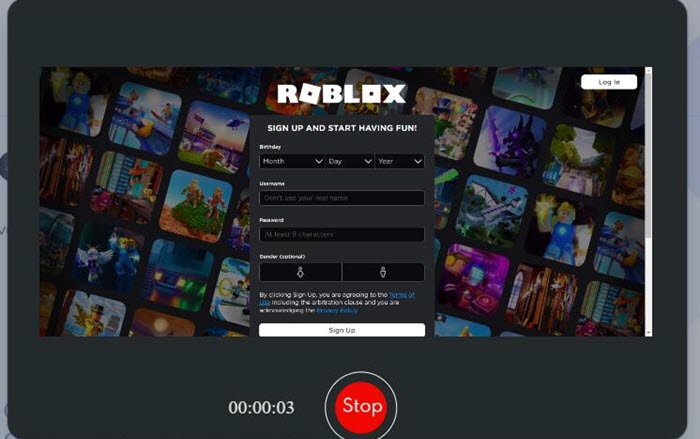 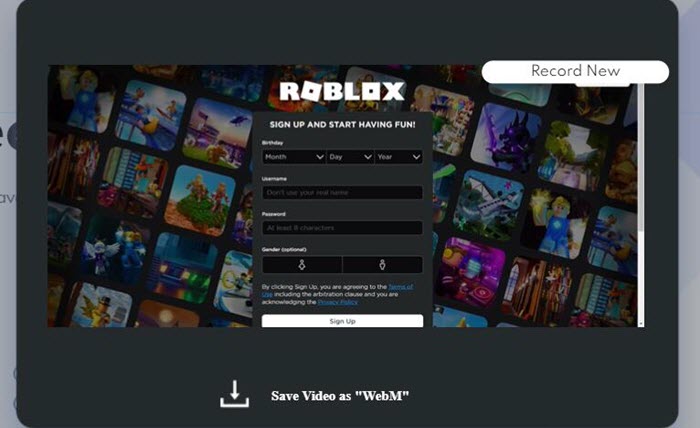 Way 5. How to Record Roblox on iOS/Android

Roblox is available to play on iOS 9 and greater, Android 5.0 and higher. Fortunately, almost all supported iOS and Android devices have inbuilt screen recording tool. So, you can easily record Roblox gameplay on mobiles.

Step 1. Open Roblox and play any game on it.

Step 2. Access to Control Center on iOS or Quick Settings Menu on Android. 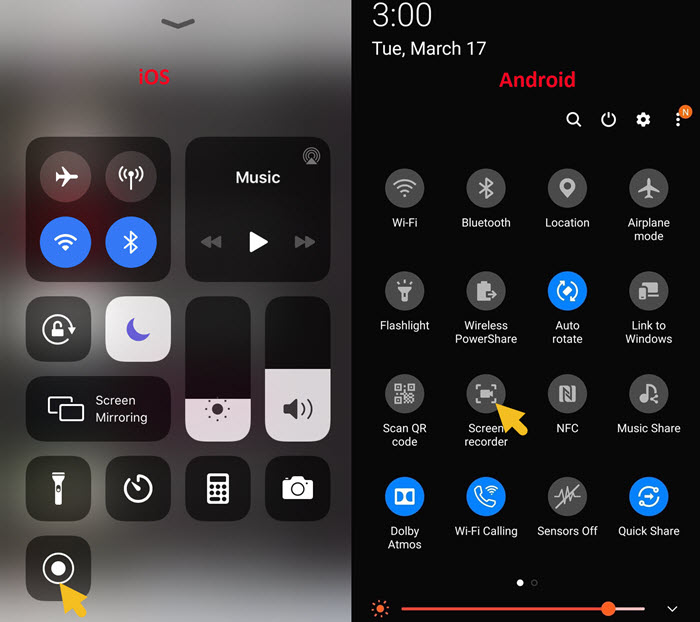 Step 4. Generally, the device will record Roblox with voice by default. Or, some devices allow you to set audio sources.

Step 5. Click stop recording and the video will be automatically saved to album or gallery. You can make some edits, for example, trimming or cropping screen recording.

Roblox brings game entertainment for millions of players. Every time you try to share amazing gameplay with others, you need to know how to record Roblox at first. Varying from devices, you can get different but easy ways from here. And, iTop Screen Recorder enables you to easily screen record Roblox gameplay with voice on Windows (10) gameplay for free. You can also turn on webcam and microphone if you want to make a gameplay guide video. Besides, it can give the best performance for you to record Roblox in HD without lags/FPS drop even on a low-end PC. If you are playing Roblox on PC, download iTop Screen Recorder to make the recording done.