1080p, also known as Full HD that delivers crisp images, is now the mainstream resolution for movies/TV shows, online videos, games, broadcasts and supported by various devices from computer to mobiles. When it comes to screen recording, most people prefer to capture screen in 1080p HD for sharing a high-quality video with others locally or online. You can make it if getting a 1080p screen recorder. Because, a professional HD screen recorder can help you easily catch all key points, especially for gameplay and movie recording.

Since screen-recording technique has come a long way in recent years, and now a great many impressive tools available spring like mushrooms out there. However, a rare part of screen recorders supports recording 1080p videos. So for your convenience, we sort out 4 best 1080p screen recorders free for PC, Mac, iOS, and Android. Then you don’t have to waste time trying different screen recorders only for picking out a suitable one.

A good free screen recorder makes your work easier and it is possible to improve the cooperation efficiency between you and your colleagues. No time wasted on waiting for someone to do a demonstration face to face. No misunderstanding on conveying operational requirements verbally or in writing. You just need to record your screen on computer to send it to your colleagues with the help of a HD screen recorder which can make the process of sharing information simple and convenient. Undoubtedly, iTop Screen Recorder is the outstanding one among so many 1080p screen recorders for PC. It gives full compatibility with all Windows PC from the latest Windows 11, Windows 10 to Windows 8/7 to screen record in full HD with no effort.

iTop Screen Recorder allows you to record audio to express verbally as assistance for a video tutorial and it enables webcam recording. Furthermore, it also supports flexible selection in the recording zone, taking screenshots, multiple output formats, and no lagging in the high definition recording process. Here are 5 features which make it outstanding.

● 100% Free
iTop Screen Recorder is completely free for all users to satisfy the demands to record screen on Windows 10, 11 8, 7.

● HD Video Quality
One of the most important advantages iTop Screen Recorder is that it supports exporting high-quality creations at all times. So the viewers will be in a good mood when they watching the recording clips with perfect image quality.

● Low CPU Usage
It is designed as a high-performance HD screen recorder due to its low CPU usage. You will never experience lags or fps drop specially when recording Switch gameplay or any other gameplays.

● Totally Safe & Private
The safety and privacy of personal video recordings are crucial issues that all users concern about. However, users needn’t worry about because it officially announced that only users themselves have access and the right to use HD recordings.

● Video Editing
This free 1080p screen recorder for PC has built-in video editor options that are convenient for users to trim videos at the moment they finish the recording.

How to Record HD Screen with iTop Screen Recorder?

Maybe you are wondering that will such a good screen recording software be troublesome to handle? No worries. It’s easy to operate and we’ll walk you through it step-by-step.

You can select the recording region, and decide to enable microphone, mic, mouse, and webcam. Besides, this is a screen recorder no watermark which means you can customize the watermark as you want. Find a file location for the recordings. Of course not forget to set video and audio preferences. 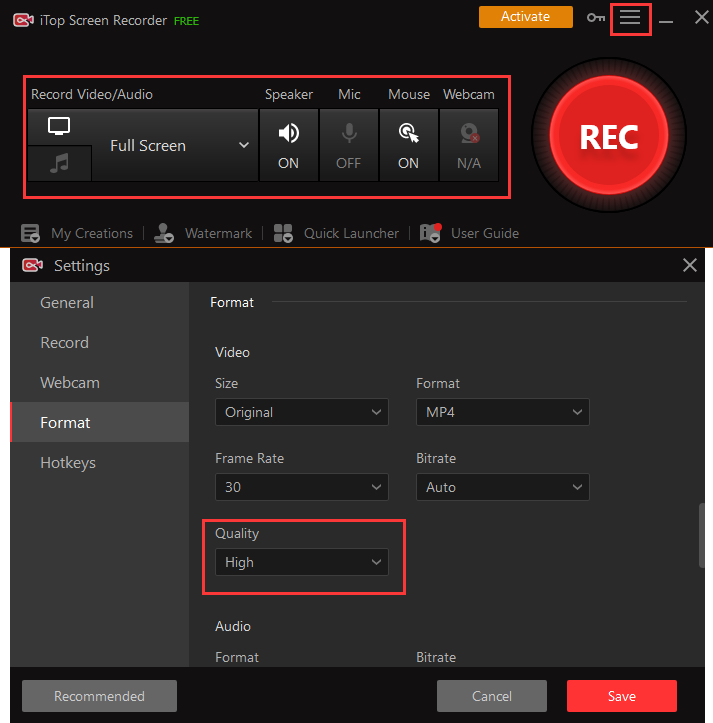 Step 2: Record the Screen in iTop 1080p Screen Recorder. Click the “REC” Button or press hotkey “F9” and wait for an automatic three seconds countdown to record the screen. Press “F10” to pause and press “F11” to take screenshots. Finally, click the stop button to finish the recording.

Step 3: Edit the recording. Under the “My Creation” part, you can edit and preview the video clips and screenshots to check if you are satisfied with the result that a 1080p screen recorder captured. 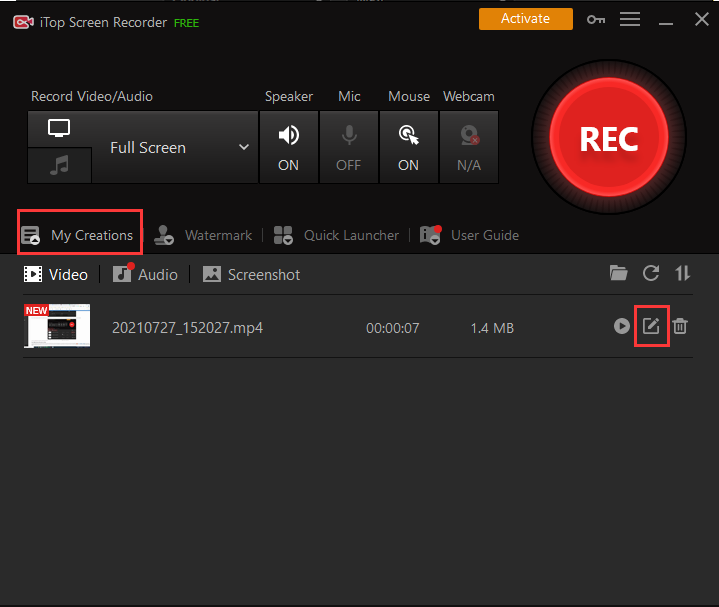 To sum up, the iTop Screen Recorder is an ideal choice for anyone who needs to record smooth videos, record kill moments in gaming, and record Zoom Meeting's important part simply with the 1080p screen recorder free.

If you are still browsing a bunch of reviews to seek a top free HD screen recorder for Mac, you came to the right place. It is a must-have to record the screen on Mac in high quality. Really? You can imagine a scene that you received an explanation video email on work but due to the low video quality, you can not see the call-word of the operational commands clearly. How annoying it would be! To avoid this happening, we recommend using the best 1080p screen recorder for Mac - OBS Studio to figure it out. 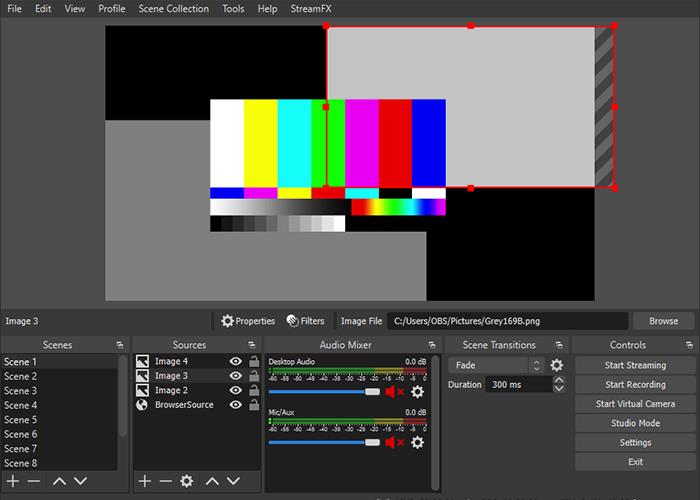 If you use broadcast software, you must hear of the well-known OBS Studio which is also popular as a free and open-sourced 1080p screen recorder on Mac. You can use it to do HD live-streaming and recording, and it also supports secondary functions like taking a screenshot, editing videos and audios, recording webcam, encoding streams into MPEG-4 AVC and HEVC formats, and so on.

Especially for a gamer, OBS Studio is the first choice to capture games for it has no restrictions on the length and number of creations. And this best HD screen recorder for Mac allows a gamer to record games running in full-screen mode to display a fluent performance because it records from the graphic card directly. Good things always come late so OBS Studio might also take a little while to set it up. Be patient! It’s powerful and completely free!

Unfortunately, OBS isn't that easy to use. For people who new to recording screen and webcam, the free iTop online screen recorder can be a good tool to record the screen.

iOS 11 and later versions offer the native screen recording feature that allows you to capture screen in full HD on compatible iPhone, iPad and iPod. This built-in iOS screen recorder is fairly suitable for beginners who just want to record a HD video with audio for later sharing or uploading. You don't need to install a third-party app to swallow the space. It is the best, safest and most efficient way to record iOS screen in HD.

It is easy to make recording with this built-in 1080p screen recorder for iOS.
1. Open Settings > Camera > Record Video > change the resolution from default resolution from 720p HD at 30fps to 1080p HD at 30fps or 60fps.
2. Open Control Center > click Recorder icon.
3. It will start recording 3 seconds later. Tap on the red bar on the top-left corner to stop and finish the recording.
4. Screen recording will be automatically saved in Photos app. Now, you can edit it in Photos app. 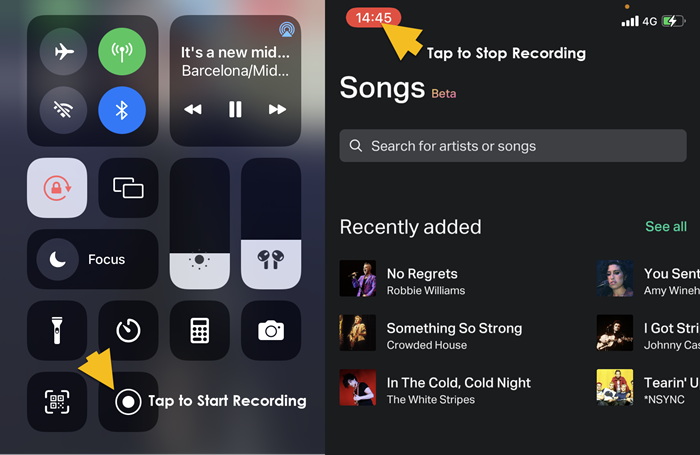 Nowadays, we live in an era of science and technology, and smartphones have become an indispensable electronic product in our life. They can not only help us realize the basic necessities of life, but also meet our spiritual needs. It can be said that the Android screen of smartphones witness that almost everything is going on in our daily life. But how can we share the interesting things in life like a how-to snippet about finding gourmet shops on your Android phone or a funny movie clip with others? Don’t worry. The 1080p screen recorder for Android named AZ Screen Recorder can help you deal with the problems. 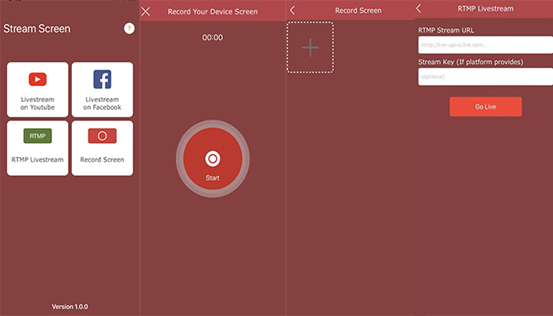 In addition to basic video and audio recording capabilities, the AZ Screen Recorder allows Android users to add text messages or logos to the recording screen and capture audio in the recording process. To make it easy for users to edit and share video immediately after recording the screen, this Android 1080p screen recorder also provides an additional AZ plug-in that can be used to compress and trim video, replace audio, add text, effects, and more.

Whether for gamers, tutorial makers, YouTubers, and others who are seeking a powerful 1080 screen recorder free for Android, unquestionably, AZ Screen Recorder is what you need.

In a word, almost all screen recording software can meet the basic needs of recording video, but there are wide variations in the details. What we can do is to recommend the best and most appropriate 1080p screen recorders for you according to different devices, so that you can make decisions based on your real needs. For example, iTop Screen Recorder is always an excellent choice for people who are seeking for full HD screen recorder free. Not because it can record video and audio on Windows, the high definition smooth recordings, attractive video editing options, high safety, and privacy, and 100% free edition are the reasons that users are fond of it. Stop hesitate! Give it a try and learn how to record your screen to experience its unique charm right now!