How to Screen Record with Voice on PC/Mac/Android/iPhone

Social media is utilized by people around the world in their everyday life. According to the marketing survey conducted by Twitter Inc., a video tweet has a six-time higher chance to be retweeted than a photo tweet. Compared to text or photo content, videos deliver an informative message that is difficult to explain in words. They are more catchy and appealing to the public. With the rapid growth in video on social media, there is a rising need on creating high-quality how-to videos. When making instructional videos such as a product demo, tutorial, lecture, meeting, or game, adding your narration to explain is necessary during video recording. Keep reading and learn how to screen record with your voice efficiently on PC, Mac, Android, and iPhone in the following content. 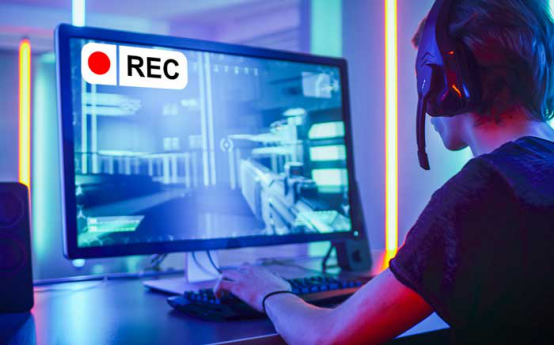 How to Screen Record with Voice on Android/iPhone/iPad

In this part, we will mainly discuss how to screen record with voiceover on mobile devices. Let’s begin with Android phones.

How to Screen Record with Voice on Android

For Android users, one of the most popular screen-recording apps is ADV Screen Recorder. The latest version is currently available on the Play Store, allowing people to record sounds from both microphone and internal audio. In addition, ADV Screen Recorder supports recording in full HD quality and it has a magic overlay without a menu that covers your whole screen.

By simply follow the below steps, you could know how to screen record with voice on Android phones.

Firstly, download and install the app on your phone. A window will pop up, asking you if you allow audio recording. Choose "I Agree" to continue.

Secondly, go to recorder setting for audio, camera, and overlay configuration. You could choose to record the screen with your voice by selecting the “Microphone” option in the audio setting.

Thirdly, go back to the main interface where you could find a magic button overlay. Tap the “Record” icon to start and your voice will be recorded simultaneously. Pause is available during the whole recording process. When finished, tap the “Stop” icon to end and your video recording could be found in the output folder. 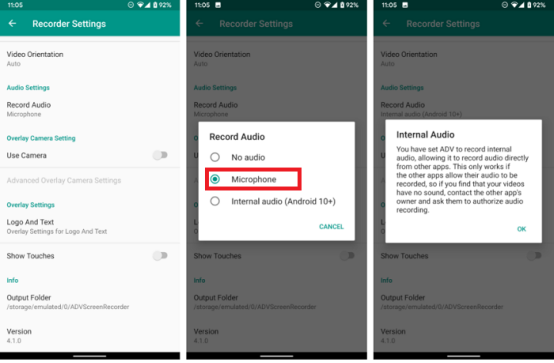 How to Screen Record with Voice on iPhone & iPad?

In the “Control Center”, you could find a “Screen Recording” icon, which is the last one in the penultimate row. Long press the button to open a new interface for recording. As you could see, “Microphone” is turned off by default. To record your voice, you need to tap the icon to turn the microphone on.

Get started by tapping the “Start Recording” icon, and the external audio will be recorded simultaneously. Kindly note that the in-built recorder will record everything that happened on the screen including notification. To prevent unexpected notification, turn on “DO NOT DISTURB”. Once finished, tap the “Stop” icon to end, and your video recording could be found in the output folder. 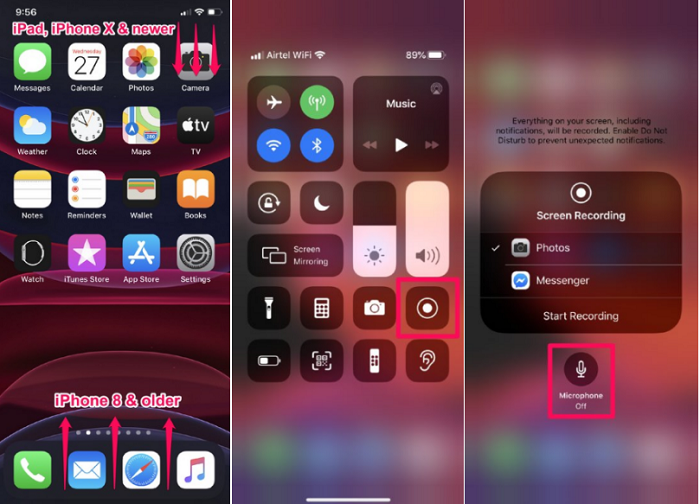 How to Screen Record with Voice on PC/Mac

In this part, we will mainly discuss how to screen record with voice on PC and Mac.

For windows users, iTop Screen Recorder is a great choice that enables people to record the screen smoothly in HD quality without lags. It also supports flexible screen capture, multiple output formats, video editing & trimming, and ultimate recording time. Most importantly, iTop Screen Recorder makes it possible to record sounds from both internal and external. Follow the steps given below to screen record with voice on PC.

Download and install the recorder on your PC. Click the “Recording Option” icon for configuration. If you want to add your narration during screen recording, turn the “Microphone” on, so the external sounds could be collected.

iTop Screen Recorder allows flexible screen recording of a full screen, a window, or any selected region. You could select the region as per your wish. Start the screen recording by clicking the red “REC” icon and you will see a three-second countdown to inform you to get ready. While recording, your voice will be recorded as well through the microphone. If you want to pause the recording, click the “Pause” icon on the floating toolbars.

Then how to make a voice-over video of the screen on Macs? Macs don’t have a built-in recorder that supports screen recording with your voice. To narrate what’s happening on Mac, you have to download a third-party application, and one of the most popular choices is Dropshare. It is a comprehensive tool that allows you to capture screens, record screencasts, and upload files.

Download and install the Dropshare on your Mac. Go to recording settings to enable the microphone to collect both system audio and external sounds. Hit the red icon to stat and your voice will be simultaneously recorded. Click the red icon again if you want to stop recording.

Screen recording with narration is powerful while sharing information. This brings a new challenge on how to screen record with voice. With plenty of screen recorders rolling out in the markets, there are still many problems people face when recording screens with voiceover on their phones or laptops. For instance, some screen-recording software only supports internal audio recording, and the external sound is not allowed to be collected. While others give no possibility to pause while recording. Therefore, we strongly recommend you download iTop Screen Recorder and obtain a better screen recording experience.